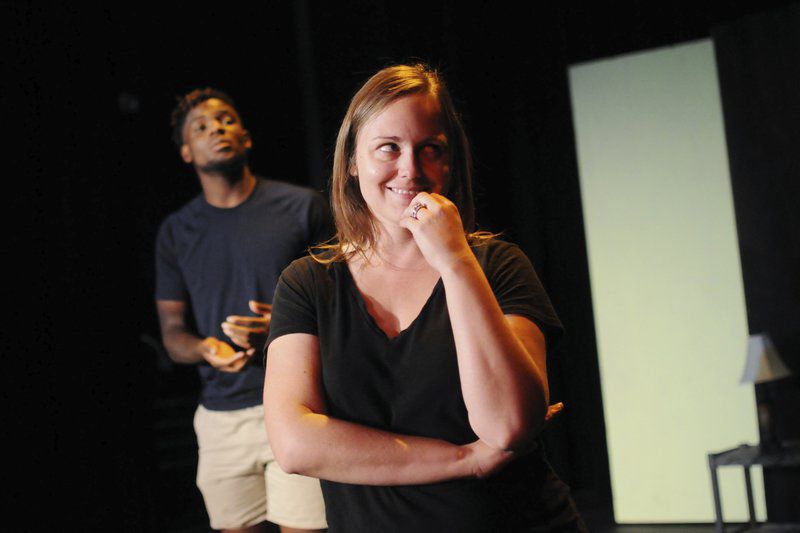 They say that all’s fair in love and war, but is it still fair if it involves multiple plots for murder and unrequited passions?

A group of talented actors at the Huntsville Community Theatre are set to find out as they present the humorous “Murder at the Howard Johnson’s,” which opens Nov. 11 as the theatre’s second show of the season.

Written by Sam Bobrick and Ron Clark, the play tells the story of Arlene, Mitchell and Paul, all caught in a tangled web of love and deceit as they plot and ultimately fail in numerous attempts to murder the other’s lover.

While the content may seem serious at first glance, humor abounds in this zany, three-person production.

“It’s a classic love triangle,” director Melissa Miller said this week. “I don’t think that any of these characters learn anything at the end of the play, but it is a fun time and takes place in such an absurd fashion. I think that we can laugh at the relationships among these characters and recognize the silliness that sometimes find its way into our own love lives.”

Miller acknowledged that casting the show early on was a challenge as the first auditions brought in a ton of talent and the difficult task of selecting the perfect lineup.

“Casting was really, really tricky,” Miller said. “We had some incredibly talented people come out and audition. For this show, I had the choice of many different people and we could really have cast it a bunch of different ways and it would still have been successful.

“The cast that I selected is working really well together and, as a director, if you have a cast that is willing to try new things and go in a different direction with you, then it’s always more fun and that’s exactly what we have now. Our rehearsals are fun and, at the same time, we’re working really hard.”

“Murder at the Howard Johnson’s” will be Miller’s eighth show at the Huntsville Community Theatre. She brings a long list of accomplishments to the stage.

A graduate of Sam Houston State University, Miller now teaches drama and English at Trinity High School. Her recent contributions to the HCT include “Nunsense,” “The Trip to Bountiful,” “Holiday Revue,” “A Midsummer Night’s Dream,” “Almost, Maine,” and most recently “Holiday Cheer!”

“If you think you’ve ever been in a relationship where you had it bad, come and see this show and be thankful for what you have,” Miller said with a laugh. “This show will be really fun and we’re hoping the audience enjoys it.”

Tickets are on sale for $12 for adults, $10 for seniors and military personnel, $6 for students and children 17 and under. For more information, call the Huntsville Community Theatre at (936) 228-1996.