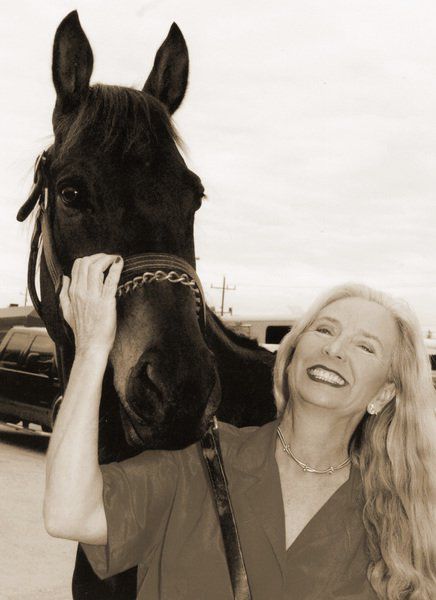 Artists often source the greatest inspiration from bits and pieces of their early lives.

For Huntsville photographer Barbara Sloan, a childhood passion for equestrian culture has blossomed into a lifelong project that has taken her around the world and back again.

Sloan’s forthcoming book series “Love of the Horse,” is a photographic homage to her favorite creature and a visual diary of her global tour to document a horse in every country. She’s set to debut her book at the Local Authors’ Night at the Huntsville Public Library on Thursday from 5 to 6:30 p.m. and an opening show of her framed work will take place at Arden’s Gallery in Houston on Dec. 10 from 4 to 6 p.m.

“I started working on this project when I was in France a few years ago,” Sloan said Friday. “I was touring around and after having been to France several times, I saw the Eiffel Tower and I was wondering how I could take a unique photo of it.

“At that moment, there were hundreds of people with their cameras aimed at the tower, so I walked across the street and there was this sculpture of a horse head. I positioned it in with the photo of the tower and I thought, ‘This is going to be my signature. I’m going to photograph horses, or something horse-related in every country of the world, just to show tribute to this incredible animal who has done so much for mankind.’”

Since then, Sloan has traveled to Greece, Columbia, Japan, Ireland, Jamaica and dozens of other far away destinations to seek out some of the rarest horses in every land. Working with her 35 mm camera, Sloan captures timeless, black-and-white stills paying tribute to the horse and its countless uses in each society.

“It’s very easy to book a flight and hotel,” Sloan said. “It’s very difficult to do all of the research and find out what is really special about horses in each country. In the Bahamas, there are some horses that have been proven to be true DNA descendants of the horses that Columbus brought to America. I found out that there was a small herd of them on the Bohemian island of Abaco in a preserve set up to protect them.

“I made arrangements with the director of the preserve to visit, but before I got there, Hurricane Sandy came through and sat on the island for several days. Right after the storm was over, I flew to the island and rented a car. Since the director’s car had been damaged, I picked her up from her boat and we drove out there only to find one horse remaining. She was the only pure horse that survived and I had the chance to photograph her.”

In some countries, Sloan says she is inspired by a specific statue, emblem or a national sport that is based around the use of horses. In every case, by traveling to each country, she’s able to experience the culture firsthand while finding her perfect picture.

“When I was in Germany, I chose to photograph the horse on the Porsche,” Sloan said with a chuckle. “They love their Porsches and it was a great car and a great symbol of the wild, black stallion on the emblem. For me, that was representative of my visit to the country.”

So far, Sloan says she has gathered enough material for her next few books after this one’s release. By visiting at least 12 countries a year, Sloan says she’s on the right path to completing the series at her own pace.

“At this point, I’ve been to almost 60 countries and to keep from having to do a book when I was really old, I figured that I would do a series,” Sloan laughed. “There are 195 countries in the world and I plan to do 13 books with 15 countries each. So far things have worked out. I’m always looking for an interesting story.”