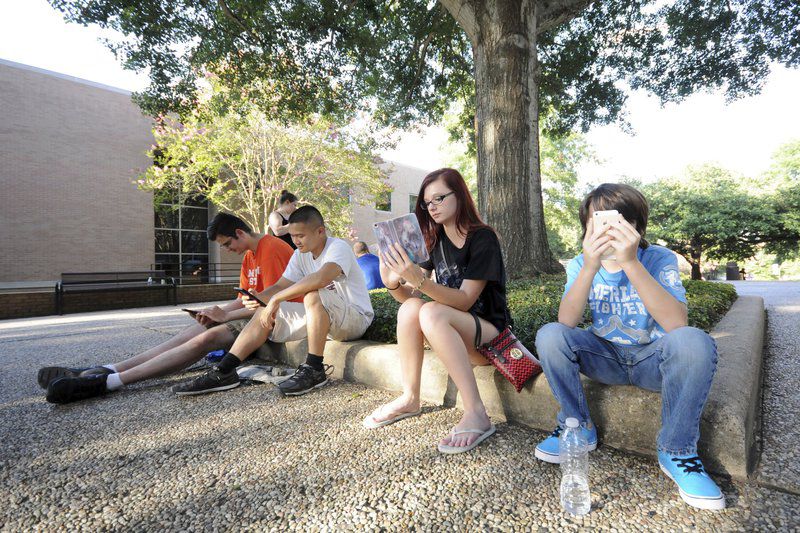 There’s a good chance you’ve seen them around town.

They’re known to travel in groups with smartphones at the ready and they’re primed to walk countless miles to fulfill one mission — they have to catch them all.

The sprawling and fun world of Pokémon that captivated children and teens of the early 1990s has officially been brought to life in the form of a highly addictive game, which lets players take the reins of their own quest to be the very best.

Now, instead of piloting a character around a virtual world filled with catchable creatures, players get to hit the streets to seek out the rarest Pokémon that are popping up in their own communities.

“When I was younger, I always wanted Pokémon to be real, so this is the closest we’ll ever see to the real thing,” GameStop employee Cody Goolsby said Thursday. “I use the augmented reality feature and love what they did to the 3D modes to incorporate Pokémon into real life.”

Since its highly anticipated release on July 6, Pokémon Go has taken the gaming world by storm.

Shooting to the top position of the world’s highest-grossing software applications in a matter of hours, Pokémon Go has been setting records in nearly every digital category.

A week after its release, the game amassed more than 21 million daily players worldwide, rivaling social media constants like Twitter, Snapchat and Facebook for downloads, engagements and time spent in-app.

In the days following the sever-crashing download frenzy, Nintendo’s stock value jumped nearly 120 percent, marking the biggest leap in the company’s value since its gaming inception in the 1970s.

However, that cash cow had a short lifespan after the company released a statement which cast a relatively fresh startup and Google spinoff, Niantic, as the main proprietor of the Pokémon Go game, although the household company name still owns a 1/3 share of the Pokémon Company enterprise.

While new phone and tablet applications seem to come a dime a dozen, few programs have blended reality and the virtual world so seamlessly, while captivating the world’s consciousness at the same time.

Using Google Maps as its sounding board, Pokémon Go utilizes augmented reality, meaning gameplay takes place outside in the real world, far away from the confines of couches, TV screens and tangled cords.

“My activity level has very much increased since the game released,” 22 year-old Sarah Connor said. “I play roller derby, but I broke my leg in December at a game, so not being at my normal physical level was hard on me. But the game actually made me go to parks and walk around and enjoy the sunlight.”

“As a Type 1 Diabetic, the walking and exercise has definitely helped in lowering my blood sugar levels,” Goolsby added. “I’ve already walked over 50 kilometers while playing since the game launched.”

Much of Pokémon Go’s success can be derived from nostalgia.

Throngs of Pokémon fans, who, at a formative age, were introduced to the adorable and very catchable monsters by way of cartoons, Gameboy cartridges and card games, now have the ability to live out their childhood dreams in real life as they travel far and wide to play.

“I’ve been a fan of Pokémon since the Gameboy red and blue versions,” Goolsby said. “I was a young trainer when they released the games and still own them to this day. I own the original cartoon series and have managed to keep up with all my holographic Pokémon cards 20 years later.”

Aside from discovering new creatures in the game, players are encouraged to visit places called Pokéstops around their area, which give out the items needed to continue their journey. Many of these pit stops are historical markers, art features, churches and points of interest that the average person may not have visited in the first place.

Just like the original game, players are also out to capture gyms by battling their newly caught Pokémon against others and with a three-team system in place, the game is easily becoming a new social phenomenon.

“I enjoy the getting outside aspect of the game,” Connor added. “I have bad social anxiety so meeting new people is a challenge for me, but having people with a common goal helps me a lot.”

“My students actually got me interested in playing because I don’t actually know anything about Pokémon, or what I like to call them Poké People,” Sam Houston State University professor and broadcast operations manager Leean Muns said with a laugh. “I think it’s really good that it’s getting people off of their couches. We’ve met so many different people walking around. It gives you that common ground and makes it easier to start a conversation with someone new.”

With local Pokéstops and gyms at places like the HEARTS Veterans Museum, the Sam Houston Statue Visitor’s Center and the Texas Prison Museum to name a few, Pokémon Go seemingly has the ability to drive up tourism in places that folks may not have visited before.

“I hadn’t been to the Sam Houston Memorial Museum in a very long time and so when I saw that there were two gyms and a Pokéstop there, I walked around the grounds for a while,” Muns added. “I hadn’t been there since I was a little girl, so I guess you could say the game is helping me venture out a little bit more.”

After looking forward to the game’s release for years, Goolsby took the lead after Pokémon Go dropped and created an online community page for players on Facebook and is currently planning a group event where players can enjoy the game and a brisk walk together.

“On August 13 from 2 to 10 p.m., we’ll be having what’s called a Poké Walk. I grew up here in Huntsville, so when it came out, I wanted to organize an event to bring everyone together to play,” Goolsby said. “We’re going to start at Eastham-Thomason Park and make our way through the city and campus. It’ll be a nice, long walk, so I encourage everyone to bring a backpack, water and costumes are definitely encouraged. This will be the first one, but I’m hoping we can do something like this once a month.”

With less than a month of playtime under their belts, aspiring Pokémon masters are already looking forward to what the game has in store in the future.

“I’d love to see something more interactive with our peers,” Muns said of the gameplay. “What is something that we, as a group, can do to make it more exciting? I love that we have the red, blue and yellow teams, but I know there’s more to come.”

“I’m looking forward to trading and personal battles because that’ll be a whole new way to level up and gain experience,” SHSU graduate student David Daniel Burch said. “I’m also looking forward to December, when my favorite batch of Pokémon come out, the second generation.”

No matter the team color or level of player, the common theme among everyone is that it’s all abut having fun and being the best in this newly created world.

“I never quit until I finish something so I have to collect them all,” Muns added with a chuckle. “It was kind of funny, the first time I was walking around and playing, there were some people my age who I could tell were playing, but when I got close to them they kind of hid their phones. I kind of chuckled at that, you know, just be yourself.”