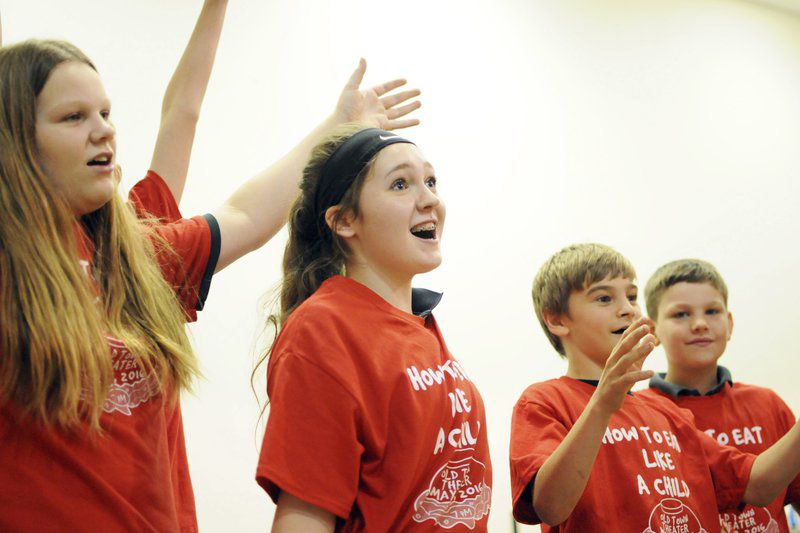 Do you remember what life was like as a child?

Things were pretty good when the only worries came when playtime was about to be over, or when it was time to sneak out mom’s cooking in a napkin after she prepared that one uneatable meal.

For folks who may feel too far removed from their carefree, youthful days, a hardworking group of young actors from Huntsville’s Alpha Omega Academy are preparing to take audiences on a trip down memory lane as they present “How to Eat Like a Child” at the Old Town Theatre this Saturday at 7 p.m.

“I love this show because in its simplicity, it’s just funny and fun and it takes you back to when you were a kid,” Alpha Omega teacher and the show’s director Marjean Creager said Wednesday. “There’s a real sweetness to this show.”

Written by best-selling author and playwright Delia Ephron, the musical comedy takes the audience on a hilarious trip back through childhood as the actors present sketches on a few of the standard dilemmas that all young ones must inevitably face.

With 12 segments including “How to Beg for a Dog,” “How to Understand Parents” and the all-important finale of “How to Refuse to Go to Sleep,” the play is sure to bring laughs to audiences of all ages.

“It has a little bit of that New York humor to it and it’s a real quick, kid-like humor, which I love,” Creager added. “It’s also a very simple play to put on since it’s just blue jeans and T-shirts and you don’t have to have a big fancy set.”

In keeping with the all-ages theme, the show itself will be presented by a talented troupe ranging from the first grade all the way up to high school. After weeks of practice, the students are ready to show off their hard work and perform on the big stage this weekend.

“It’s been a lot of fun,” freshman Will Stewart said. “We get to hang out with our friends after school and have a good time rehearsing. Now that most of the sports are over here, everything has been moving toward this play and we’re having a great time.”

“We’ve just been preparing and rehearsing and I’ve been enjoying it a lot,” freshman Abby Ferguson added after rehearsal concluded Wednesday. “We’ve been practicing every day and working really hard to make it as perfect as we can for the audience. It’ll be really fun.”

Unlike many of their past plays, “How to Eat Like a Child” will be presented under the bright lights of J. Philip Gibbs, Jr. Centre for the Performing Arts downtown, giving AOA students the chance to see what professional actors face when the big curtain rises.

“I’m a little nervous,” Ferguson said regarding the venue. “I’ve never done anything like this, but I’ve always been interested in drama and I think it’ll be good to be on the big stage. We’ll just have to adjust to it and I think it’ll turn out great. You just have to be confident and express yourself to have fun with it.”

“We’re going to have a dress rehearsal Saturday morning at the Old Town Theatre. We’ve been in individual rooms practicing and today was our first day rehearsing in the gym,” Creager added. “We’ve been working on our stage voices and I know they are going to do great. Don’t miss this show. It’s going to be a lot of fun.”

Tickets for the show are $3 for students and $5 for adults and can be purchased at the theater before the show begins on Saturday night.