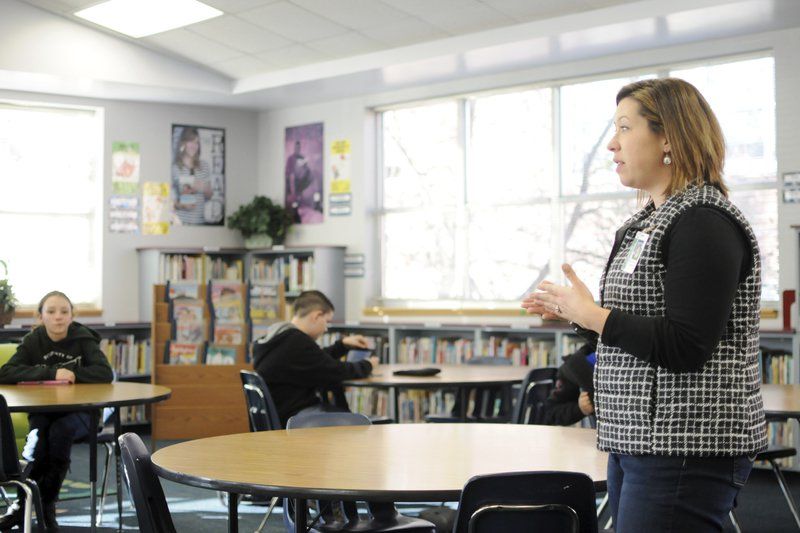 The final class bell rings at Huntsville Intermediate School and the frenzy begins.

Parents line up outside to pick up their children and the students are, of course, excited to spend the rest of the day out of the classroom.

For a group of 15 or 20 students who happily gather in the library, one of the best parts of their school day is just beginning — the Friends of Rachel Club.

Founded after the powerful Rachel’s Challenge presentation last October, which promoted spreading kindness and acceptance in all HISD schools, the FOR Club looks to sustain those goals all year long by helping students help others.

“We had a big first meeting at the beginning of the semester and we gave the students butcher paper, markers and crayons and we asked them to write down any idea for the FOR Club that would help other people,” Huntsville Intermediate counselor and FOR Club organizer Stephanie Sanders said Tuesday. “It’s for any student that wants to be a part of it and anyone who wants to be a positive role model.

The FOR Club members quickly put their collective heads together and knocked around ideas about how they could become helpful members of their community. Sanders says that out of all the ideas the group came up with, one kept coming back around.

“One of the first things that came up was sports scholarships and they wanted to be able to help kids play sports who wouldn’t otherwise be able to,” Sanders said. “It’s really about the students coming up with the ideas and then we try to steer them in a direction that’s possible.”

With a bit of help and direction from their teachers and friends, the FOR Club students selected the Adaptive Special Needs Sports Program for the Huntsville Family YMCA as their first fundraising campaign.

While the FOR Club is no ordinary organization, their fundraising method was equally unique as they chose a specifically Southern “Kiss the Pig” contest at Huntsville Intermediate to raise funds for hopeful student athletes.

“Myself, principal (Delanise) Taylor and one of our assistant principals, Ms. (Christy) Cross, all had a can with our face on it and students and teachers would put money in the can of their choice,” Sanders said with a smile. “Whoever got the most money got to kiss a pig.”

Altogether, the fundraiser drummed up $170 for the special needs sports program and the students had a blast choosing which of their teachers would pucker up to a pig.

“Principal Taylor lost, or won, whichever way you want to look at it,” Sanders said with a laugh. “She had the most money in her can and got to kiss a real live pig. We did a live broadcast so all the kids could watch and we also put it on the HISD private YouTube channel.”

The club met Tuesday to present the raised money to students and representatives of the Huntsville Family YMCA and meet a few of the children who would be using the money to play sports in the upcoming year.

“I was honored when they chose the YMCA and this program,” said Sandra Clifton, community executive director of the YMCA. “This is a new program and it’s only $25 to participate, and if parents can’t afford it, we need the scholarship money for that.”

With a few fundraisers and charity drives under their belts, the FOR Club has its sights set on the upcoming school year and all the new ways they can help the community.

“We did a pajama drive on Christmas to benefit the Scholastic Pajama Drive and we also did a collection for our own social services,” Sanders added. “We have a small social department in HISD that helps our students and a lot of times, they don’t really have a budget. All the students collected different items like deodorants or toothpaste, toothbrushes and soaps for the program and we collected a lot of stuff.

“In February, our goal is to put on a Valentine’s Day banquet for one of the senior citizens centers in the area and that’s something that the kids really wanted to do. We have a lot of different things going on.”

While the club certainly has a blast during their fundraising efforts, the main goal of the FOR Club is not lost on the students who meet each week. Never short on new ideas, each student knows their participation helps to spread kindness, love and happiness to the people they meet every day.

“I think that since it’s close to the end of the school year and we’re all ready to leave, we should do a fundraiser for shoes since not a lot of children have new shoes,” fifth-grader Brilee Wiggins added. “We could have a lemonade stand and bake stuff and sell it, too.”

“It’s not about just going and buying stuff and bringing it, it’s about creating a chain, like how Mattox has,” fifth-grader Tori Paul said as she pointed to a paper-clip chain held by her friend Mattox Lowry. “That chain, I know it’s made of paperclips, but that could be like people. It starts with one person and she or he just started creating happiness and then it just kept going, and going, and going and the chain just kept growing.

“It’s like in the office where we have our positive shoutouts, thats a chain of positivity and we need a chain of kindness.”