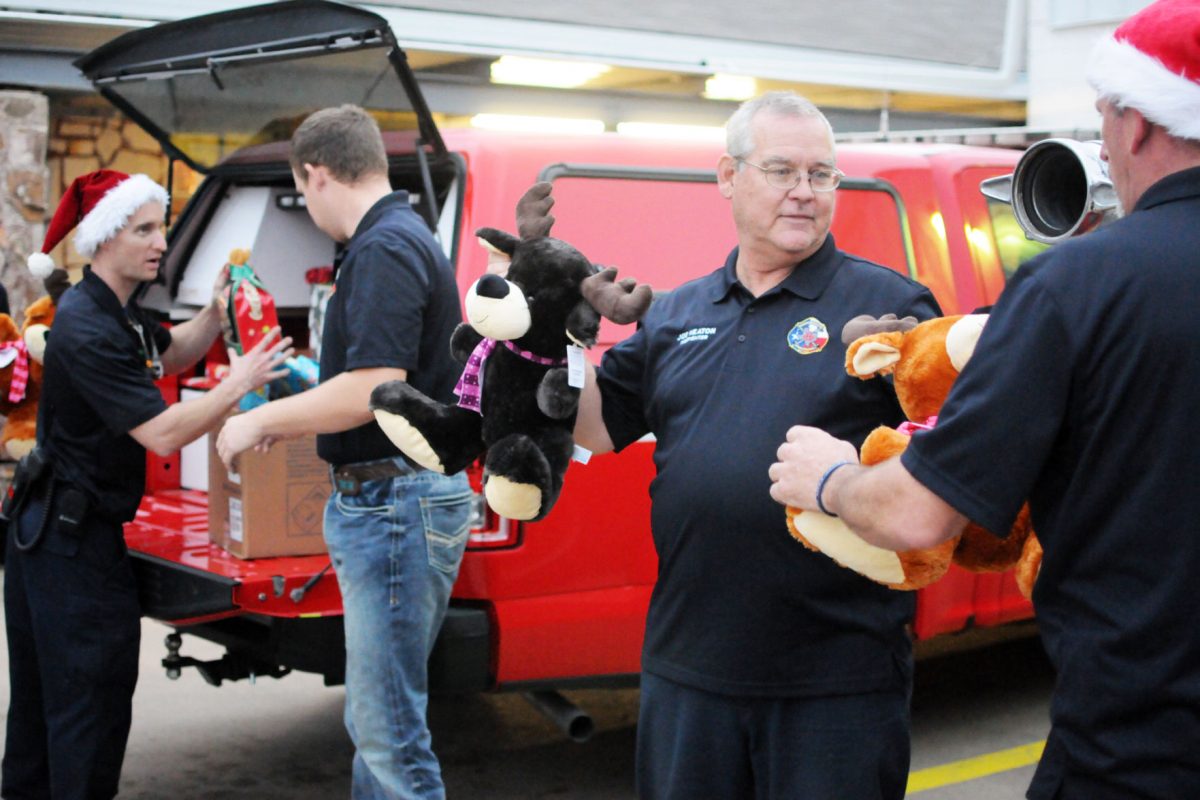 While most folks in Huntsville were cozying up to a decorated tree on Christmas Eve last Thursday, a group of local firefighters was just getting started on a night shift at Huntsville’s Fire Station No. 2.

But instead of hoses and heavy fire gear, these firemen were hauling bundles of games, toys, bikes and stuffed animals for local children who may have needed a little extra help getting into the Christmas spirit.

Dressed from head to toe as Santa Claus with a natural, gray-and-white beard, Philip Johnson, owner of Papa John’s Pizza in Huntsville, was on hand to help load up the gifts into an old-fashioned fire truck as the firefighters prepared to head out on another neighborhood run.

“My daughters planted the idea in my head when they told me I’d make a good Santa Claus,” said Johnson as the bells on his bright, red Santa suit jingled. “Last year, I drove around dressed as Santa Claus and gave out pizzas, but it didn’t feel like enough. We couldn’t reach enough people and I’ve always had a toy drive idea in my head.”

After working across the street from Fire Station No. 2 for more than a decade, Johnson realized the opportunity to team up with an already existing toy drive. He reached out to the department in early June.

“The only guy I knew at the department was Tim Stafford, so I called him and said, ‘Tim, do y’all do a toy drive?’ and he told me that they did, but they normally just dipped into their own pockets to buy toys, so we decided to team up this year,” Johnson added. “Then, Wiesner (of Huntsville) came on board and Clint Mac went out and bought radio time to promote it. Brookshire Brothers and several other people and businesses came on board, too.”

With the help of local businesses, the toy drive grew bigger as Johnson volunteered his time to play Santa more often, urging folks around town to come and donate toys while having their children’s picture taken with a jolly old Saint Nick.

“I’m talking about an overflow of toys,” Johnson said smiling. “Hundreds and hundreds of toys came in and I can’t even say how many families we’ve been able to help. Yesterday, they went down to the burn center in Galveston and brought toys to the kids. There’s about 34 kids down there and it just touches their hearts.”

By reaching out to local schools, churches and sometimes, just by word of mouth, the first responders were able to find the families in Huntsville that simply couldn’t afford to buy gifts for the children in their lives.

After creating a list (and checking it twice), members of the fire department rolled out through the neighborhoods, making stops at the houses and surprising families with boxes of toys on the night before Christmas.

“We’ve done this for quite a few years, but we’ve never had one this big,” Stafford said. “This year, with the help of Papa John’s, it’s just exploded. So many merchants in town pitched in, Wiesner, Brookshire Brothers, the Dollar Stores, Kroger — they all pitched in and helped us get these toys together for these kids. That’s what we’re here for, help us to help these kids.”

As the classic 1947 Engine No. 3 fire truck came back to the station to pick up more presents, the firefighters formed a chain to load up more gifts for another trip around town.

“For us, the real meaning of Christmas is to give,” said firefighter Adam Winningham after loading up another box of toys. “We’ve had individuals who’ve come up to the station just to drop off toys and it’s exciting for us to be able to turn around and give back to the community that we protect.”