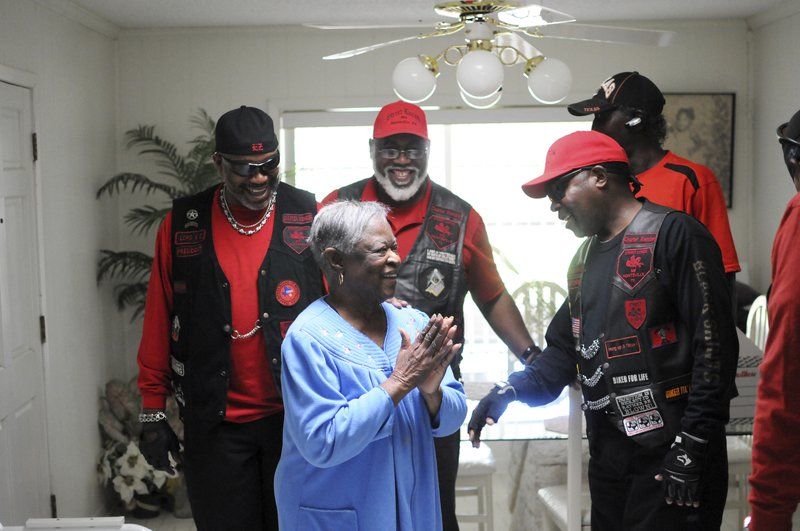 You can hear them coming a mile away.

With flashes of chrome in the sunlight, the deep rumbles of exhaust and each member lined up two-by-two down the freeway, the Street Lords make their presence on the road known.

While some might think this motorcycle club is headed to a biker rally or maybe to the nearest bar, they’re actually on a mission with purpose.

They’re heading out to give Thanksgiving meals to those who need them the most.

Each Thanksgiving for the past two years, members of the Street Lords of Huntsville Motorcycle Club spend the week picking up tasty turkeys, hams and a variety of sides for those who might not be able to have them otherwise.

Using the club’s own money, the Street Lords have re-established the true meaning of the holiday — sharing a meal with your neighbor.

“We believe in blessing others as we have been blessed,” said group member Carlos Ross, who goes by the moniker, Lord Prowler. “A group of us came together and we wanted to help the elderly and we figured this would be a great way to do it. The first year, when we had just got started, we were able to give out five Thanksgiving meals, and this year, we’ve been blessed with the chance to give out more.”

As they line up their custom bikes and choppers in the parking lot of Brookshire Brothers, you can see a smile on each member’s face as they head in to pick up baskets of food. By way of some creative fundraisers and collections among the group, the club plans to give out eight meals to Huntsville residents this year and they’re always looking for ways to give more.

“Each guy in the group selects two people that they know of that’s in need of a meal,” Ross added. “Some are elderly, some may have a lot of kids and some may not be able to afford a meal. We see who has the most need and then we go and deliver. It makes us feel good because they feel good.”

Once all the food is packed up, the engines rev and they hit the road to their first location. The smiles on everyone’s faces light up even brighter as they reach the front porch of the first family’s house.

From here on out, it’s hugs and laughter all around, pure Thanksgiving tradition.

“I think it’s a lovely thing,” Huntsville resident Ella Kelly said after the Street Lords dropped off her turkey dinner. “They’ve made my Thanksgiving, they really have. And all of them are Christian men, I love that about them.”

As quickly as they park, they’re off again down the road to the next house to greet another happy family. As they twist and turn their hulking bikes down the city streets, folks come out onto their porches to wave and children rush to see the shiny paint and hear the loud engines.

“It’s just such a great felling,” said group president,Ed Owens, also known as Lord EZ. “When we formed this group, we talked about bringing joy to other people and it just manifests through our ability to help and give back. We like to give to those who need, but so many of these people have done things for others in the past and we cherish that. Not all of them are needy, some just deserved to be blessed.”

“What they do is very nice, they’ve really lifted me up,” Huntsville resident Bernice Davison said. “I’ve known many of them for a while, especially Carlos (Ross).”

“I think they’re very nice guys and I’ve known many of them their entire lives,” added Ernie Hatch from her home in Huntsville. “I really thank them.”

As the Street Lords club grows larger each year, so do their plans for giving back. After recently acquiring a new clubhouse in Point Blank, the group is planning to start a Christmas toy drive and expand their Thanksgiving meals as much as they can.

“We’re planting seeds for shade trees that we may never sit under,” said Elgin “Ever Ready” Davis as he headed back toward his bike. “If we can bless some people and bless their families, that’s what we’re going to do.”

For more information on the Street Lords of Huntsville Motorcycle Club or to donate to their causes, contact public relations officer Jim Jones at (936) 577-2151. 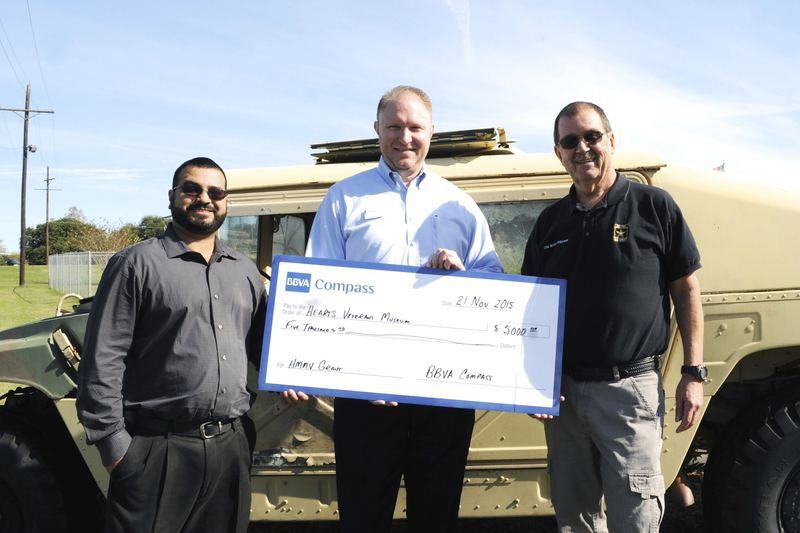 The sprawling grounds of the HEARTS complex are lined with the artifacts of wars past and now, with the help of BBVA Compass Bank, one of their war machines will be getting a much-needed makeover.

Administrators at the museum reached out to apply for the BBVA Foundations Grant, which awards money to deserving non-profit organizations that have a strong presence in the community.

“When we first saw the grant, it was closing the next day and Scott (Francis) gave us a 30-day extension so we could apply for the grant,” said Mark Robinson, director of the HEARTS Museum and retired Command Sgt. Major of the U.S Army. “Otherwise, we never would have had the chance. They are directly responsible for us getting it.

“This unit is pretty rough,” Robinson added as he gestured toward the cracked paint and broken windows of the Military Police Humvee. “The grant money will help us buy the parts to restore it to a showable condition so that people can sit in it and enjoy some of the aspects of what it would be like to sit in a Humvee in a military situation. The kids will love it.”

The $5,000 cash grant will go a long way to help restore the vehicle to it’s original fighting condition and representatives of BBVA were happy they had the chance to help improve a piece of the museum’s already sterling collection.

The grant also marks the second time that BBVA has supported the veterans museum, as they initially helped fund and build the signage that guides visitors around the museum grounds.

“Anything that BBVA can do to help veterans we’re honored to do it,” Huntsville branch retail executive Scott Francis said. “We appreciate the opportunity to help the HEARTS museum and any chance we have in the future, as well. We are very glad we were able to help.”

“For the kids that come to the museum, it means a lot to them to be able to sit in a vehicle like this and get a taste of what it was like as a solider. It helps to make them proud of the veterans that we have here in Huntsville and it’s just our way of honoring those who have served. Without help like this, we couldn’t do it.”

As the air starts to cool and the leaves turn a darker shade, a little bit of color sure goes a long way here in Huntsville.

For Jean Smith of the Parkview Place Specialized Living Community, the color palette of fall has given way to the vibrant pink, orange and yellow hues of her beautiful flowerbeds.

Smith began working on the flowerbeds outside the apartment complex on her own accord last fall and her hard work has been a huge hit among her neighbors.

“It was so full of weeds and grass burrs out there and I thought we needed a beautiful atmosphere,” Smith said Thursday. “There’s not a whole lot that you appreciate when you’re older, so I just really felt like we needed a prettier atmosphere.”

With that goal in mind, Smith set out to cultivate the grounds of the downtown complex in the hopes of brightening up the walkways and sitting areas for her friends.

“They had most of the flowers I’ve planted here already, so I just took cuttings and planted them,” Smith added. “I bought some seeds and plants that we didn’t have, too.”

Now almost a year later, the beds are booming with bright colors and a host of various flowers and herbs that make a rather dreary parking lot come alive. With pink blossoms from the purple secretia, the lush greens of the sedum and big, bright daisies to gaze upon, the entire building looks like a new place.

“All she does is work,” longtime friend and neighbor Forrest Nichols said. “She went out there and weeded all the beds herself and planted new grass seed. If it weren’t for her, the outdoor areas would look boring. She’s just so wonderful.”

Smith says she owes her green thumb to her childhood when she learned that a few simple seeds can make anything look better.

“My first gardening experience started when I was 6 years old,” Smith recalled. “Somebody gave me a little packet of seeds and, of course I didn’t have sense enough to really know what to do, so I just planted them in a small space and I was hooked. I decorated everything with flowers, including my playhouse. When we moved to Texas, my stepmother got a nice, large yard and I started keeping it for her. I just graduated into knowing what to do.”

For her efforts, the management and residents of Parkview Place awarded Smith with a certificate of appreciation, thanking her for making the place brighter. Now that the flowers are in full bloom, Smith says she’s just not planning on stopping anytime soon.

“You know, you don’t just plant a garden and then forget it because the weeds will take care of it quick,” Smith added with a smile. “From here, I’m just planning on upkeep, I’ll just be taking care of what’s out there.”