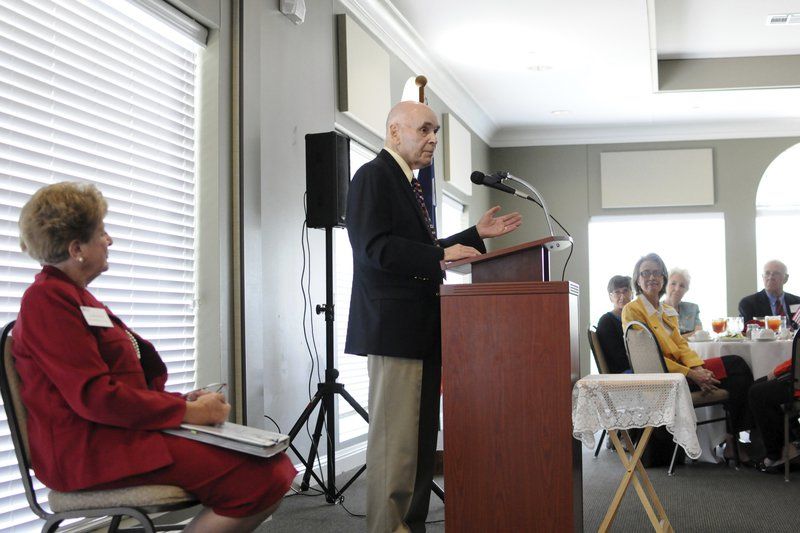 Few experiences in life elicit a more visceral response than dealing with the horrors of war. Whether seen firsthand through the eyes a soldier or experienced as a civilian, the chaos of battle can forever shape the way a person views the rest of the world.

For former Sam Houston State professor Dr. Witold Jerzy Lukaszewski — who personally witnessed the German invasion of Poland in 1939 — war impressed upon him the necessity of studying and preserving history to pass it on to future generations.

The Mary Martin Elmore Scott Chapter of the Daughters of the American Revolution National Society honored Lukaszewski by presenting him with the Americanism Medal on Tuesday.

The society’s charter states that recipients must have shown extraordinary qualities of leadership, trustworthiness, service and patriotism and must have actively assisted other immigrants to become American citizens, or displayed outstanding ability in community affairs.

A few minutes spent with the lifelong scholar and professor and it’s easy to understand his deservedness of such an honor.

During an emotional speech at the award ceremony inside the Elkins Lake clubhouse, Lukaszewski described his journey through life and began by detailing the harrowing scene from his childhood as warplanes flew over the roof of his family’s home in Poland.

“Our picket gate on our fence swings open and a solider rushes in and whispers something to my father,” Lukaszewski told the silent crowd. “I remember seeing my father’s face darken. He looked toward my mother and said, ‘The Russians have just invaded Poland, I have to report to my unit.’”

With his father in the midst of a conflicted occupation of their home country, the Lukaszewski family was cast into a tragic series of events and a fate that was all too common for Polish families. The combined Nazi and Soviet invasion marked the beginning of the World War II and Lukaszewski and his family were in the midst of the chaos.

“On April 13, 1940, we hear a very loud knock on the door,” Lukaszewski continued. “Three Red Army soldiers burst inside of the house with rifles and fixed bayonets, followed by their officer. The officer looks at my family and tells us we are going away. We knew what that meant.”

Lukaszewski’s family were among the thousands of those arrested by Soviet secret police and deported, taken by rail cars during an exhausting three-week ride to an unknown destination.

“We were taken to northeastern Kazakhstan and dropped in the middle of a marketplace,” Lukaszewski said solemnly. “We were told, ‘Here is where you are going to stay for the rest of your life.’”

While his sister and grandmother were allowed to stay in Poland, Lukaszewski and his parents were bounced between Polish camps in Siberia, Persia, India and across several other countries after his father’s service in the Polish army.

After the mass deportation of citizens from their war-torn home, thousands of Polish refugees, including the Lukaszewskis, were stranded in civilian camps adjacent to army bases. While they enjoyed basic freedom, the living conditions and constant movement were less than ideal.

“The camp life was a special kind of experience,” Lukaszewski said. “We were free in camps. We had churches, we had organizations, but living in camp in the midst of a different culture, something was missing. Especially as a child, it was impossible to plan for our futures.”

“After 10 years and 20,000 miles, we arrived in New York in 1950,” Lukaszewski said with a smile. “The land of the free, as I would find out, guaranteed us certain liberties that we had not had, those being life, liberty and the pursuit of happiness.”

Lukaszewski took full advantage of his newfound home and continued his education while in America and abroad in England. His lifelong love of reading — specifically about the second World War — quickly sparked future plans when he wasn’t expecting it.

“One day I was reading in my bunk and two colleagues were across the room arguing political points about World War II. They called over to me and said, ‘Vic, you’ve read all these things, explain this war to us.’ After I did, I went back to my bunk and realized that this was where my interests lay. Even so early in my life, someone had recognized a competence in me.”

Lukaszewski went on to earn bachelor’s and master’s degrees from Seton Hall University while majoring in history and political science. He got a doctoral degree from Columbia University in international relations in 1973. He completed a dissertation entitled “A Communist Experiment in Limited Democracy” for his adviser, professor Zbigniew Brzezinski, who served as U.S. national security adviser under President Jimmy Carter. He also served in military intelligence in the United States Army and graduated with honors from the U.S. Army Advanced Leadership School.

Lukaszewski began teaching international politics and history at Sam Houston State University in 1970 and taught for nearly four decades at a host of American and international colleges. Over the course of his tenure, he had the ability to shape minds of younger generations and pass on his personal story in lieu of just textbooks and standard course work.

Lukaszewski’s career in education led him far beyond the walls of a university. Aside from lecturing in America and Europe, he was awarded a postdoctoral research fellowship from the Hoover Institution of Stanford University in 1990, earned a designation as a Piper Professor (excellence in teaching award) from the Mini Stevens Foundation and was honored with the designation of professor emeritus status at Sam Houston State University in 2010.

Later in his career, Lukaszewski was elected as the national vice president of the Polish American Congress and represented the PAC in meetings in Uruguay, Argentina, Poland and Hungary. He also organized Polish President Lech Walesa’s visits to Houston and Sam Houston State University on two occasions in 1996 and 2009 and arranged and organized President George H.W. Bush’s visit to to the campus in 1998, while serving as the main translator for both parties.

By taking his chaotic experiences in a war-torn country into a profession where they could be used as teaching tools, Lukaszewski shows that no matter what life brings, there is a way to achieve great things. He has since worked tirelessly as an advocate for democracy and used his experience as a testament to the necessity of education and the freedom to pursue it.

“American freedom is a hard freedom. It is not easy, it is not angelic,” Lukaszewski said in closing. “You have to find out what is asked of you, you have to have the ability to do it and you have to put in the hard work and overcome all the obstacles to get there. It is a hard freedom, but believe me, based on my own experiences, it is a beautiful freedom.”