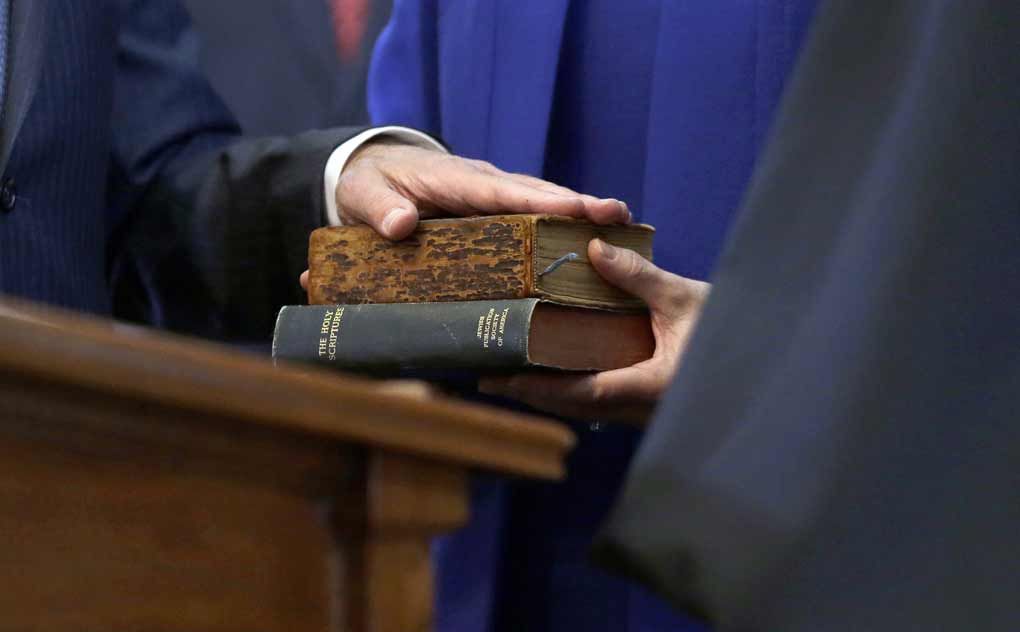 It’s the stuff of Texas folklore. A nearly 200-year-old holy text with missing pages, stories of a thieving custodian and bickering history experts sounds like a decent plot of a made-for-TV movie.

This drama, however, can’t be seen on cable. It’s playing out in the sterile archives of the Texas Supreme Court and the main actor is none other than Huntsville’s namesake, Sam Houston.

On Tuesday, incoming Governor Greg Abbott placed his hand on the tattered cover of Sam Houston’s Bible as he took his oath of office on the steps of the state capital. The historic tome has felt the palms of more than 30 governors and countless state officials as they continued one of the longest running inaugural traditions in the U.S.

Over the past five years, caretakers of the text have collected evidence questioning the age-old story of it’s provenance and now suggest that the time-honored tradition is based on botched information.

Initially, the book was believed to be from Sam Houston’s personal library and writing on the flyleaf matching his style corroborated that tale. Houston was said to have given the book to the Texas court in the late 1800s, but no concrete record of that gift exists. The real kicker is that Houston’s signature is mysteriously absent, as the bottom half of the page was torn off long ago.

It was long-believed that the page was ripped off by a thieving janitor, who stole thousands of pages of Supreme Court scripts in the 1970s. However, a recently discovered news article from 1941 that describes the torn page in great detail has exonerated the janitor, but still sheds no clarity on the whereabouts of the signature or whether or not the book belonged to Houston in the first place.

Despite the controversy, the historic significance of the text is without question. The book’s publishing date is in 1816, an undoubtedly formative time for the nation and a mere 20 years before the creation of the Republic of Texas. By it’s very age and period, it is an artifact that represents a fascinating time in the history of our nation.

While the debate rages on, many scholars still believe that the text was Houston’s own. Mac Woodward, the director of the Sam Houston Memorial Museum, had the chance to see a copy of the flyleaf firsthand.

“As far as I could tell, it was Sam Houston’s writing. … I had the chance to compare it with other copies of his writing and it is identical,” Woodward said Tuesday.

Prominent Houston scholar and biographer James L. Haley also agrees that the proof is in the writing. In an article on the Texas Supreme Court website Haley confirmed “I can say with a high degree of confidence that the inscription is indeed in his hand. The formation of the letters is uniformly consonant with all that I have seen, and the rubric, especially, is unquestionably his.”

Even still, neasayers cite that the writing has never been fully examined by a forensic document examiner and that concrete proof of Houston’s ownership is still up in the air. The court would love nothing more than to see this mystery come to an end, but that doesn’t seem likely.

Amidst all the debate and mystery, one fact remains true, the book is at the very least historically relevant.

“It’s not important to classify it.” Woodward said. “Whether it was his Bible or the one he used shouldn’t be important. The Bible is important because of it’s connection not only to him but it’s connection to the state of Texas and the surrounding community.” 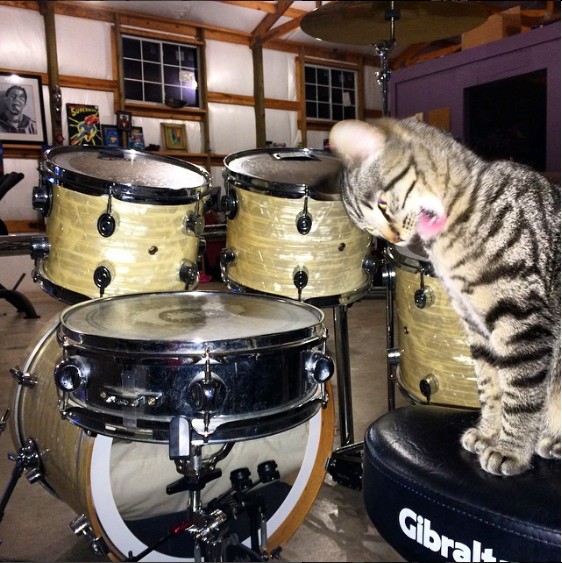 The butterflies are always there, lodged deep beneath my chest and knocking around the confines of an empty stomach. No matter how many times I do this, I’m always nervous.

It doesn’t matter if we’re playing at a coffeehouse for 12 or a brightly-lit, staged venue for hundreds, just getting up on stage makes me short of breath. The lights are bright and it’s dead quiet. The crowd takes turns staring at us blankly and sipping their overpriced drinks. They’re waiting for us to do something.

A sideways glance from my bassist and guitarist and the lead singer whispers, “You guys ready?”

At once, our instruments blast out in unison through the smoke-filled air. The first song always has to hit them hard, for if you don’t grab the audience in the first five minutes, you probably won’t for the last 40.

The speakers’ first thunderous blast knocks away any remaining nervousness or reservations I had about tonight. Now, I just need to focus on not messing up. But like clockwork, I drop at least one drumstick per show.

These crazy Friday nights represent only 5 percent of what I consider to be a glorious second job. It’s a mostly unpaid position with late nights, early mornings, conference calls and an expense report that will never see reimbursement. There’s no health, vision or dental insurance, but the benefits package is unreal.

I get to play music.

So much goes into actually getting to the show that once the day is finally here, it’s over in a flash. It’s the countless hours of rehearsal and preparation melding into a 45-minute package for your enjoyment or disinterest.

It’s the seedy bar owners, tricking you into playing one more free set in the hopes of a sweet, paid gig. It’s the cancellations, the empty promises and the “constant content updates.” It’s a beautiful balancing act and a massive weight of responsibility.

While the idea of the lone rebel musician is overpopularized and exciting, it’s hardly ever true. Any musician of any caliber will quickly tell of the support system that got them to where they are. They’re the friends and family who come to every show they can, rain or shine. They’re the parents who purchase a shiny, red, loud and obnoxious drum set for a skinny, 14-year-old, redhead (Thanks Mom and Dad). They’re the audience members who smile and bob their heads, approaching you after and show to say they dig what you’re doing.

There’s something special about creating music as a band. Every mistake you make has the potential to turn into something beautiful.

Completely separate individuals push their creative forces together in order to make a unified body of sound. We bounce off each other, adding and subtracting from what the others give. We all sound greater because of each other’s presence.

In my short time playing music, I’ve had the pleasure of playing at countless venues, big and small, with a rag-tag assortment of musicians. I learned long ago that it will never be about the money.

It’s not fame or fortune that offers the most exciting prospects in this field. For me, it’s the moments of pure bliss experienced during the act of delivery. It’s for that song played perfectly. It’s for the look on your face at the end of our set.

We drive hundreds of miles, spend thousands of dollars and pour our blood sweat and tears into what we do for you. Our music is a huge part of our lives and it’s so much more than just a hobby or a phase.

For anyone out there, putting yourselves on the line in any creative endeavor, we salute you. Never stop doing what you do, because someone will always be listening. I too know the reasons why you can’t stop. It’s a part of who you are. It’s the process of creation and the fear of rejection that drives us to get out there. It’s about pouring our lives into something in the hope that it means something to someone else, too.

In all honesty, it’s about the butterflies, those beautiful, clumsy butterflies.